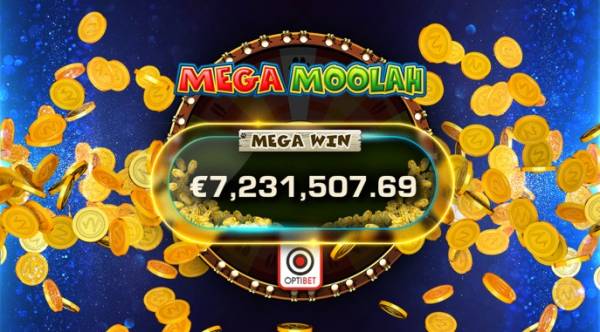 What are the chances of winning the Mega Jackpot in one of Microgaming’s Mega Moolah slots? About 1 in 185 million. That was the probability when one lucky player won €6,597,136.10 at Optibet.com on 4 June 2021. What are the odds of that happening again after two months? At the same casino and in the same small country as Estonia?! That is exactly what happened when another 30-year-old read the article of a lucky winner in the news and decided to try his luck, when he landed himself an even bigger €7,231,507.69 jackpot on 6 August 2021!

The story is that much more unbelievable as both players are the same age and they both work in construction. The new and even bigger €7.2 million win trumps June’s as the biggest online casino win by an Estonian player. There was only one time anyone won even more, and it was €10.8 million in a local lotto. The Mega Jackpot win also marks Microgaming’s sixth win of seven figures or more on the progressive jackpot network this year and the hundredth and first in its history.

Both Mega Moolah jackpot winners triggered the prize with 3.75-euro bets. The winner of June’s prize said he had played 30 euros that night in total. Since he never wins in games of chance, the mind-blowing win came as a major surprise. For the money, he plans to build his dream home, which ironically a local bank refused his loan application for the construction earlier this year. The winner of €7.2 million has equally lofty plans, including buying a new house and a car, while also investing a part of the win.

Chris Davis, CPO at Enlabs, the company which own Optibet, commented: “We were delighted when Mega Moolah dropped at Optibet the first time, but for it to happen a second time a matter of weeks later is remarkable. I am certain that both existing and new Optibet customers will appreciate that this situation can only be attributed to the luck of the brand.”

That being said, it seems that dreams do come true. As one Russian proverb goes: He who doesn't take risks, never drinks champagne. If today is the day then try Microgaming’s new Immortal Romance Mega Moolah or Absolootly Mad Mega Moolah, which already paid out close to €20 million earlier this year. At the moment of writing, the Mega Jackpot stands at €3 million and is getting closer to the boiling point.