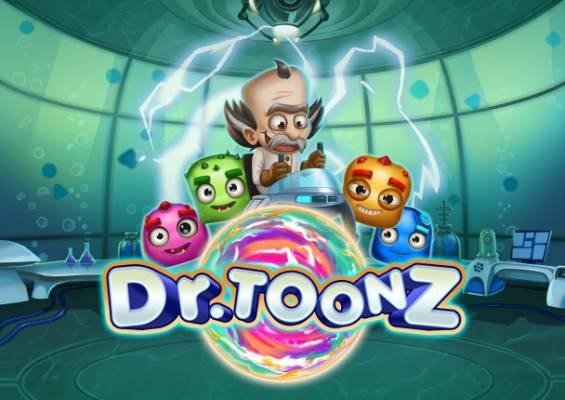 Reactoonz is Play’n GO’s version of Minions, both of which share a similar success in their field. Dr. Toonz is the game developer’s third effort at combining the fun alien characters with a plethora of different bonus elements that have turned Reactoonz into a global hit. This time around, the game can generate wins of up to 22,000x and is played with a 4,096-ways-to-win setup rather than the traditional grid format. Dr. Toonz is scheduled for full release across Play’n GO casinos on 10th September 2021. Let’s take a glimpse at what to expect.

Dr. Toonz is a 6-reel video slot with dynamic payways that can increase from 4,096 to 262,144 ways to win. It is also a cascading slot, so each win will implode the winning symbols and re-fill the empty positions to potentially form new wins. The game is easy to follow: just watch for three or more symbols of the same kind to appear from the leftmost reel to the right.

Quantumeter has been an integral part of every Reactoonz slot, and this third episode is not an exception. Dr. Toonz will collect charges as you form wins and release one special charge per spin when the cascades are over. The charges include the following three bonuses:

The same features are also active during Dr. Toonz’s Free Spins bonus. You’ll need 3, 4, 5, 6 Scatters symbols to get 10, 15, 20, 25 Free Spins respectively. Once triggered, the bonus cannot be retriggered. The best part about the free spins is that you are guaranteed to get an x2 multiplier on 1 or more reels. The best case is when all 6 reels have the multiplier, during which all wins can be magnified by x64 since the multipliers will multiply each other as well!

Dr. Toonz will be out in a few weeks and come in RTP configurations ranging from the maximum of 96.25% to the lowest 84.25%. It is a departure from a grid setup that has served the title well over the past years, but a step that gives the Toonz a refreshing point of view. It is also a version with a significantly higher win potential which is a strong selling point on its own. As you wait for the release you may also want to check out Play’n GO’s hit title for August that came out two weeks ago called ZZ Top Roadside Riches.