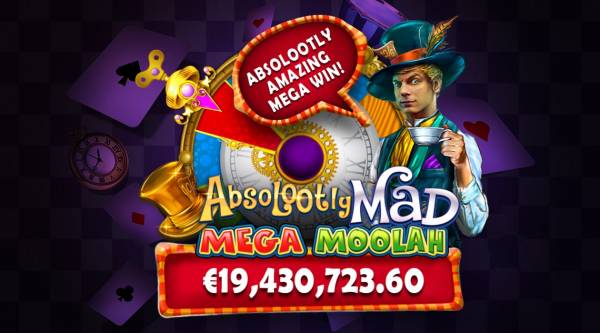 Not even a week had passed since we posted about two major WowPot Jackpot wins and gave a heads up about an imminent Mega Moolah drop when the Mega Jackpot finally struck. The largest-ever jackpot win in an online slot machine paid out a staggering €19,430,723.60 win on Absolootly Mad™: Mega Moolah. The lucky player is from Belgium, who was playing at Napoleon Sports & Casino at the time of the event on 27 April 2021.

“This is a historic day for Napoleon Sports & Casino. We are completely over the moon. The winner of the Mega Moolah jackpot read about our player winning €2 million+ with the WowPot and pursued his own dreams and luck on the other Microgaming jackpot-giant Mega Moolah. It almost feels like our site has become “the home of the jackpot”. This record-breaking jackpot is the absolute highlight of the amazing partnership we have with Microgaming”, said Tim De Borle, CEO at Napoleon Sports & Casino.

This life-changing pile of cash, which Microgaming claims will be paid as a lump sum, was triggered almost exactly one year after Triple Edge Studios released the Alice in Wonderland aka Mad Hatter themed slot. Little did they know that over just a year of operation it will award more than 500,000 wins and over €46 million in prizes across all its jackpot tiers.

Absolootly Mad™: Mega Moolah is a slot with 243 ways to win and Rolling Reels, which allow for multiple drops and an increasing win multiplier thanks to a Multiplier Trail, from a single paid spin. The highlight of this 5-reel slot is the Free Spins bonus, where the multipliers are tripled; and of course the progressive jackpot wheel. Unlike the free spins, the jackpot bonus gets activated at random, depending on how much you stake. It is there that either the Mini, Minor, Major or Mega Jackpot, like in this case, can be won.

Thanks to Microgaming’s push of Mega Moolah across many new games, including the upcoming Immortal Romance in June of this year, the famed jackpot network is growing at an ever-increasing pace. This also includes Fortunium Gold™: Mega Moolah (Stormcraft Studios), Juicy Joker™: Mega Moolah  (Just For The Win) and Mega Moolah Goddess (proprietary team), which is coming out on 13 May! While the smaller jackpots happen all the time, the last time it paid out a signific Mega Jackot was in August 2020, when a Sweden-based player won €14,239,532.84 at luckycasino.com.

With that in mind, currently, Mega Moolah Mega Jackpot is sitting at around €3 million at all eligible Microgaming casinos. Will it be a back-to-back win like with WowPot last month is yet to be seen but certainly not impossible given that it has already grown three times from its starting point!