The Hottest Game of Summer? – Jammin’ Jars 2 by Push Gaming 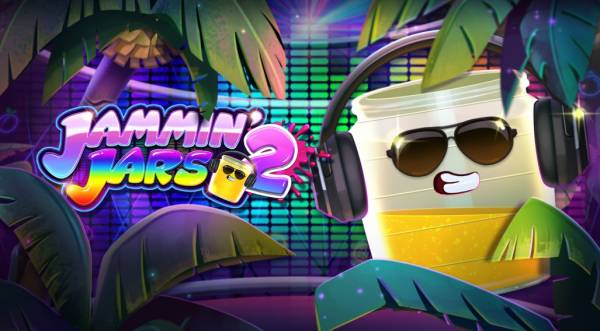 Push Gaming is preparing to launch a sequel to their highly successful cluster slot, Jammin’ Jars. The coolest jam jars in iGaming will see a summer-themed comeback on 2 June this year and there is some good news for the fans and punters alike. From what we know, Jammin’s Jars 2 promises to be another hit for the developer, so let’s take a closer look at what you can expect from this fruity disco slot.

Jammin’ Jars 2 will have the same 8x8 deck of fruit and jar symbols. Players will need 5 or more of the same symbol in a cluster, vertically or horizontally, to form a win. The winning icons will then disappear, except Jam Jars, and let new ones drop in from above to fill the empty spaces. Now, the biggest difference between the original game is the introduction of instant-prize coins. These come with different win multipliers that range between 1x and 1,000x, and will be combined for a total win multiplier when those coins participate in a win. Should one or more of the wild jars be among them, then the total multiplier has the potential to grow even bigger.

The coins can also appear as part of the mystery feature called Fruit Blast. Like the Rainbow Feature in the Jammin’ Jars 1, it can randomly generate one or more symbol clusters on the screen, which can sometimes fill up half the screen or more.

In addition to the fruits, jams and coins, the sequel will have Gold Vinyls that come as part of a brand-new progressive feature. While we don’t know the specifics of it, it should make it possible to progress through 5 different levels. And reaching the highest level will unlock the new Giga Jar Feature! While it is still a closely guarded secret, we think it has something to do with a bigger Jam Jar and, judging by some screenshots, up to 8 Giga Spins!

Speaking of free spins, this groovy cluster pays slot will also have its payout apex at the Free Games bonus. Triggered by three or more Jam Jars on the dancefloor, players can expect to hit at least 6 high-potential free rounds with at least a trio of bouncing wild symbols with growing multipliers. Watch them come closer for the best win potential, which in the new release is capped at a whopping 50,000x bet!

With that being said, stay tuned for exciting summer months: Jammin’ Jars 2 is set for global release at Push Gaming casinos on 2 June.