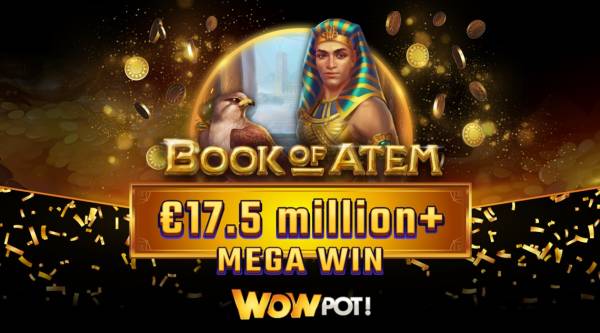 The WowPot jackpot, which was first introduced with the release of Alchemy Gaming’s Wheel of Wishes last February, was ticking for more than a year. With twice the mega prize pool of the Mega Moolah and a total of six WowPot slots contributing to the pool as of April, the mega jackpot was both imminent and promised to be bigger than ever before. The question then was: when and on which of the six slot games will it finally happen?! It took a bit more than a year and one lucky Kindred casino player to convert a £0.80 bet on Book of Atem: WowPot (made by All41 Studios) into not only the first-ever Mega win on the progressive jackpot but also the third largest award in the history of Microgaming’s progressive jackpot network!

Soon after the jackpot had dropped significantly in value, another lucky player, this time from Belgium, shared a similar success on the brand-new Sherlock & Moriarty WowPot. That’s the fifth slot with Microgaming’s WowPot jackpot, made by Just For The Win and released on 25 March. While we don’t know the bet or many details about this rare moment, the game has now awarded more than €3.5m in jackpot prizes already.

“Remarkable to see a second hit on WowPot just days after the first! Sherlock & Moriarty is a beautifully crafted game by Just For The Win, and even though it launched network-wide less than a month ago, it has already awarded more than 58,000 wins across all jackpot tiers. My congratulations go to Napoleon and their player on this brilliant win,” said John Coleman, CEO at Microgaming.

To put that into perspective, both players are among the 94 EUR millionaires created on Microgaming’s progressive jackpot network, which has paid out more than €1.3 billion across all games and jackpots to date. The company, celebrating its 20th year of operations in the Isle of Man this month, has some remarkable wins to show. Here is the top 3 Microgaming progressive jackpot wins by EUR (not adjusted for inflation):

That being said, the Mega Moolah jackpot is currently sitting on a €17 million jackpot bomb ready to explode at any moment! See our list of Microgaming casinos for the best site to try your luck while the jackpot is still hot.