November Progressive Jackpot Galore from NetEnt, Yggdrasil and Microgaming (Over €9 Million Paid Out) 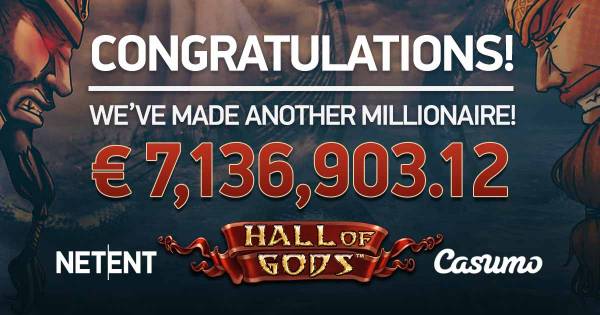 Last time we talked about jackpot wins was a lucky Playtech live roulette player who hit the £599,380.45 Age of the Gods Mystery Jackpot. Now we have more envious progressive jackpot news from three major game developers at once: NetEnt, Yggdrasil and Microgaming. Here’s the story of the three lucky players who have won a total of more than €9 million!

Undoubtedly the biggest win comes from a leading iGaming company NetEnt and their equally Scandinavian Hall of Gods jackpot slot. The winner, however, is Neil from Aberdeen, Scotland, who won a staggering €7,205,687.82 at Casumo. As the story goes, he decided to give the game a go for its invitingly high jackpot while his wife and two kids were watching TV.

As luck favours the bold, he played with his very first deposit. And he had quite a unique way to tell his family what he did with it: "From my voice they knew something was up. I told them I'd won some money. Then I wrote down the entire win on single pieces of paper, laid them on the floor and when they came over I asked them to guess what it was. They actually thought it was a lottery number!"

As to what is he going to do with all this money, he replied: "I also want to get my parents a holiday home in Tenerife. They'll love it. And I'll take my kids to Disney, then visit my sister in Australia." As a member of the Macmillan Cancer Research, he would also like to donate to charity.

By the way, this is the second biggest Hall of Gods win to date, just a little short from the €7,525,932.97 that one Norwegian player landed only this summer.

Speaking of Norwegians, the last weekend of November 2017 was also a happy one for a 32-year-old Viking who was trying his luck with Yggdrasil’s hit jackpot slot Empire Fortune. The fortune quickly turned in his favour when he/she struck a whopping €1,117,443! This game is on fire since it was just four months ago when it triggered the studio’s biggest progressive prize of €5,197,198.

To wrap up the festive video slot month, Microgaming has also just proudly announced their latest big win – the Mega Moolah jackpot of €938,306.35! Triggered by an anonymous Grand Mondial Casino player on 15 November, it’s far from the game’s heyday times, but a good indicator that it doesn’t always need to be at the €4 million boiling point to be won just as casually.

That said, if that got you in the mood of playing, then you can see all of our Microgaming, Yggdrasil and NetEnt casinos and pick the one you like without fuss by clicking on the links.

Which jackpot slot is your favourite? Share your thoughts in the comments below.