Nolimit City Releases Sequel to Fire in the Hole and Misery Mining – Dead Canary Out Now! 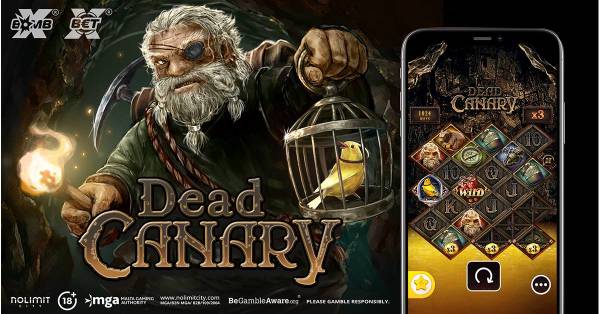 Starting today, Nolimit City fans can go to their favourite NLC casino, where they will find the newly released Dead Canary slot. It comes just two weeks after the Pearl Harbor xSize launch and is special because it’s loosely from the same popular series as Fire in the Hole and Misery Mining. And you know what that means! – A fresh take on proven mechanics like xBomb that can produce explosive wins of up to 65,000x.

Per Lindheimer, Product Owner at Nolimit City, commented on why they decided to go mining again: “We thought our favourite angry dwarf deserved a happy ending. Such a journey won't be easy though - but we’ve made sure it’s incredibly fun and entertaining. Stock up on tonnes of explosives, heaps of treasure, and a handful of trusty old canaries to scope out those dusty mines.”

Expanding reels and ways to win are distinctive features of the series, and Dead Canary is no exception. However, it does offer a new type of experience that ELK Studios fans may recognise from games like Cygnus – diagonally rolling symbols. It’s not an easy game to learn, but if you’ve played any of the two predecessors, you’ll get to grips with it relatively fast, as the core mechanics are fairly similar.

There are many things to follow within the base game and the two main free spin bonuses. This includes explosive symbols that create avalanches and unlockable multipliers that can now be found in the base game too. Here's a quick overview of the main features:

In summary, Dead Canary is not a slot you’d want to miss if you’re into volatile games. There’s a lot of depth in this release, all of which has been made possible by ingenious math that the team has once again come up with to entertain their fans during the festive holiday season.