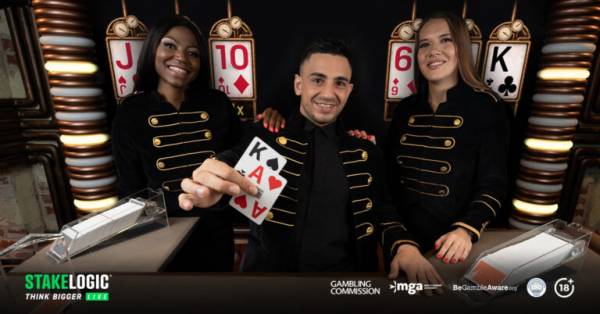 Happy New Year! Any blackjack enthusiasts in here? Stakelogic Live is rolling out yet another live casino game. It’s the second in the Super Stake series following the Roulette release in the summer of last year, and it’s called Super Stake Blackjack. The game is based on the classic America Blackjack rules and has four side bets, which the developer believes will appeal to all player types, from seasoned blackjackers to those trying to beat the dealer for the first time. There’s one caveat, there are two things forced in this game: a 50% fee for the Super Stake and the optimal Blackjack strategy. Find out more in this brief summary.

Super Stake Blackjack is streamed from a custom studio that bears a similar steampunk look to their Super Stake Blackjack. There’s a live dealer to whom players can chat, and there’s no limit to the number of players who can join this fast-paced live blackjack game. It’s played with 8 decks of 52 playing cards and a manual dealing shoe. However, what’s not manual are the decisions players must normally take to hit or stand, because they will be made automatically based on the optimal Blackjack strategy. The only thing players can control is the Split, No Split and Double or No Double. However, even with the optimal strategy, the RTP is lower than regular blackjack at 98.01%. That’s because of the mandatory 50% fee for the Super Stake Multipliers.

What the Super Stake does is introduce six multipliers in the form of Golden Cards. Each card has a Multiplier value of either x2, x3, x4, x5, x6, x8, x10, x12, x15 or x30. Once bets are closed, the screen behind the wheel then displays six Golden Cards at random. If the player’s card matches one or two of the Golden Cards and they win their hand, their initial bet will be multiplied by the value shown on both cards. In case both the player’s cards match the Golden Cards, players will be able to make any Blackjack decision without the optimal strategy.

The multiplier will be added to standard payouts of 3:2 for Blackjack and 2:1 for Insurance. But, because of the forced fee, regular winning hands only pay 0.5:1, so players won’t get their full stake back.

Last but not least, there are four side bets for players to choose from, including Golden Pairs, 3, Golden 3 and Buzz-T, each with multiple possible payouts:

If you’re interested in trying this new variation of a multiplier blackjack game, then you can try Super Stake Blackjack at Stakelogic casinos like LeoVegas today.