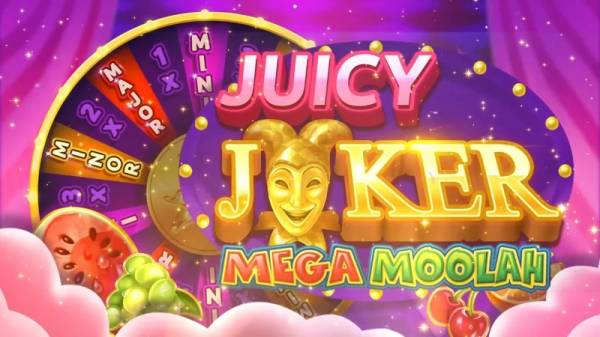 Microgaming recently announced over 20 new games for this month alone. While there are many notable slots that you may want to try out, there’s one which stands out the most: the new Juicy Joker Mega Moolah from the team at Just For The Win studio. The game was just released on 9th February and here’s what it’s all about.

Following the launch of Fortunium Gold Mega Moolah in September last year, Just For The Win enters the series with a brand new joker concept and game mechanics inspired by their 2017 title, Goldwyn’s Fairies. Juicy Joker has 20 paylines, a 5x3 reel setup and three Wilds to go along: Respin Wild, Juicy Wild and regular Wild. As the name implies, getting the Respin Wild in the middle reel will activate a respin during which special Wild positions will be accumulated before the Final Respin. On the last spin, the special positions will be populated with Wilds for a very probable Big Win celebration.

Juicy Joker also has a Free Spins bonus with the same Returning Wilds, as they call them. Get 3 or more bonus Scatters anywhere on the screen to win 10 Free Spins, of which 9 spins will be with Returning Wilds and 1 counted as the Final Free Spin. This time it’s the renamed Juicy Wilds that count the most by creating guaranteed Wild positions for the final spin (which better count because the bonus cannot be retriggered)!

Get a screen full of Wilds to win 500x your stake. Better yet, get 3 Jackpot symbols to trigger the Mega Moolah Progressive Jackpot Wheel, which guarantees either a total bet multiplier or one of the four progressive jackpots: Mini, Minor, Major or Mega. The chance of getting the feature increases proportionally with the bet size, which is typical of other Microgaming jackpot slots. Microgaming’s Mega Moolah network regularly pays seven-figure sums to lucky players around the world and now they have one more game in the iconic jackpot series to boost the current Mega Jackpot beyond €10 million!

Other noteworthy games that you can soon play at Microgaming casinos: