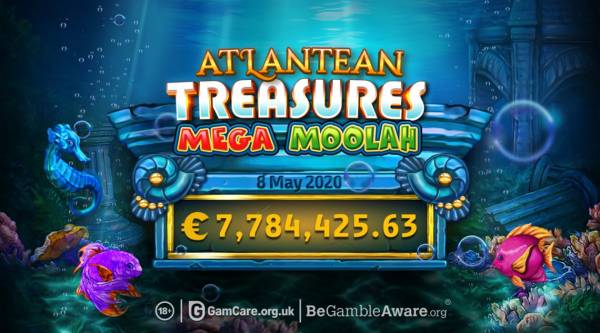 Microgaming’s newly-released progressive jackpot slot, Atlantean Treasures Mega Moolah records its first Mega Jackpot win since the game was released a few months ago. The life-changing win goes to a lucky River Belle Casino player who triggered €7,784,425.63 on Friday, 8 May.

To put it into perspective, the new jackpot slot has already awarded more than €14.2 million across 238,594 jackpots, mostly in Mini and Minor, but also 45 of which have been paid out in Major jackpots. Last week’s massive win marks the first time someone hits the Mega Jackpot in the iconic wheel of fortune jackpot bonus.

Atlantean Treasures is one of Microgaming’s three new progressive jackpot slots that came out earlier this year. The other two include Absolootly Mad Mega Moolah, which Triple Edge Studios released this month, and Wheel of Wishes with the new WowPot! by Alchemy Gaming. With so many new games to play, Mega Moolah jackpots are much more in demand now. In fact, the one before which paid out €10,735,716.84 was triggered on 5 April at Jackpot City Casino, which is part of the same Microgaming casino group as River Belle.

Jean-Luc Ferriere, Chief Commercial Officer at Microgaming, hinted that these won’t be the last releases from the company’s ever-growing list of exclusive game studios. He said: “Congratulations to the winning player for hitting the first ever Mega jackpot on Atlantean Treasures: Mega Moolah. The tremendous €7.7 million win marks another milestone for Microgaming’s progressive jackpot network, and we look forward to further enhancing our growing portfolio with additional progressive games to deliver even more entertaining gameplay experiences and opportunities to win!”

Made by Neon Valley Studios, Atlantean Treasures is a simple slot to play. It comes with just 10 pay-lines, 5 reels and one mermaid feature in the base game. This includes Expanding Wilds which lock and trigger free re-spins that can result in wins of up to 500x total bet.

Like every other Mega Moolah slot, this sunken-treasure game also features the Mega Moolah Wheel. It triggers completely at random and guarantees 1 of 4 progressive jackpots, including the Mega Jackpot. The higher you bet, the more often it’ll trigger!

Currently, Mega Moolah's main jackpot is back in the hot zone and will pay more than €8 million to a player who takes a lucky shot at any of the video slots in the series. See our full list of Microgaming casinos which will help you do just that.