Megajackpots slot giveaway £3.6 Million in a period of 5 weeks

Posted by Samuel Karugu on Thursday, 07 January 2016 in News 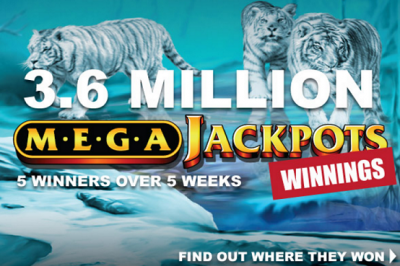 Megajackpots series of slots by IGT have been generous rewarding its loyal players. They awarded 5 lucky players with jackpots which totalled to £3.6 million. These wins all happened in two of the most popular titles in the Megajackpots collection. This is great luck and we hope that it will continue throughout the year of 2016.

On 6th November was when the largest jackpot by Siberian Storm was claimed. The player was playing the game at Mr. Green Casino. As the reels rolled, the top prize was realized and was an amazing £1,370,348.

Siberian Storm comes with a snowy theme which makes it a good slot to play during the winter season. The slot comes with a diamond shaped screen giving you 720 possible ways to bag a win. This is all attributed to the MultiwayXtra feature unique to IGT. In Siberian Storm, the wild symbol appears on the second, third and fourth reels. The free spins are awarded to you on landing the tiger eye symbol. One of the main unique features in the slot would be the progressive jackpot which is availed when you land 5 Megajackpots symbols on the middle payline.

Betfred witnessed another player win a whopping £593,480 on 18th of November, 2015 as they played Cleopatra slot which is part of MegaJackpots series slots.

The slot bears an Ancient Egypt theme. It has had huge success and has been made better by the progressive jackpot. The game has free spins on offer which are activated on landing three symbols of scatters. You will have the jackpot paid out once you land 5 of the MegaJackpots symbols on the middle reel while on the maximum bet for a spin.

Another lucky punter was lucky to be awarded £519,703 on Sky Vegas. He won the money while playing Cleopatra slot on 21st November, 2015.

Winning on a mobile device is easy and this was proven when a player won £650,013 while playing Cleopatra on Ladbrokes mobile. This happened on 9th December, 2015.