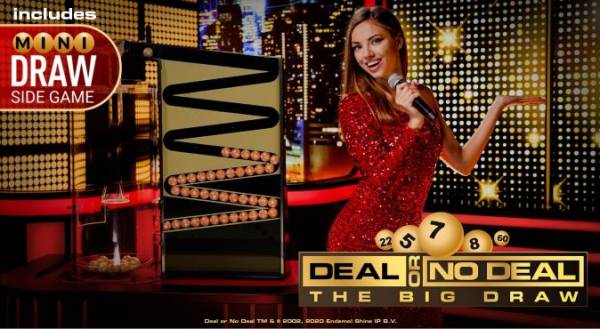 Playtech has just released a brand-new live dealer game based on the iconic TV game show. This variation of the game with bouncing balls differs from any other DOND game on the market and has all the requisites to be a favourite among live casino and bingo players alike.

This is the first time Deal or No Deal makes it to the online casino in Playtech’s varied portfolio of live games; even though the company already has a long association with the ever-popular brand with its dedicated Bingo room. Complicated as it may seem at first, the studio made sure everyone understands the game mechanics by featuring a video tutorial for players to watch at the beginning. Below is a short description.

Punters can purchase tickets for a price between €0.10 to €20, including an option to boost random suitcase values before the time runs out. The draw will feature 16 numbered prize suitcases, sixteenth of which is the player’s prize. A total of 20 balls will be drawn initially, and matching suitcase numbers removed from the ticket. The banker’s bar will be filled at the same time. Only after seven suitcase numbers on the ticket are removed will the banker make the player his first offer. Players have an option to accept the deal or buy five extra balls to continue the game in search of a higher offer.

As the game progresses, prize multipliers of up to 25x may come into play, magnifying every suitcase reward that hasn't been opened. During gameplayer, players may also have the option to switch suitcases for the one they pick, in hopes that it will pay a higher amount. Additionally, players can enter a mini draw side game, with prizes based on the first 20 balls drawn!

Edo Haitin, Managing Director at Playtech Live Casino, comments: “We’re delighted to be bringing the excitement of one of TV’s most enduring formats to Live. With the addition of the mini draw side game, allowing players to buy multiple tickets with up 6 points of decision making during the game, whether it be to buy more balls or take the bankers offer, Live Deal or No Deal – The Big Draw brings the player a new level of engagement and strategical involvement. For many players, Live play is as much about the experience as it is about gambling, and we’ve seen a growing trend towards gameshow-style formats – which is why we’re so confident Live Deal or No Deal will definitely be a big draw.”

Lex Scott, Head of Business Development for Banijay Brands adds: “We’re thrilled to be extending our partnership with Playtech through the launch of Live Deal or No Deal – The Big Draw. The in-studio presentation is fantastic and, with the combination of a proven format and innovative elements such as the mini draw, we believe it offers something genuinely unique and entertaining for Live players which aligns with the brand.”

You can try the new bingo-inspired live casino game at one of our featured Playtech casino sites today; including the studio's revamped Live Football Roulette.