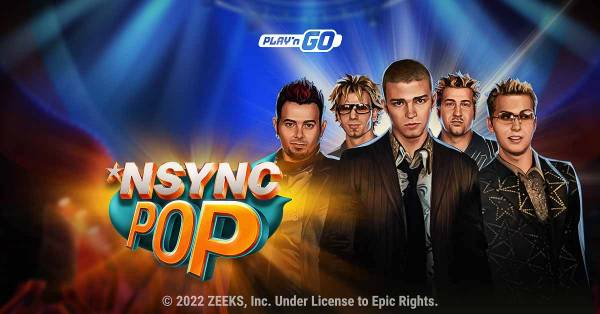 The hottest boy band of the 90s is back with Join Justin, JC, Lance, Joey and Chris starring in the newly released Play’n GO slot NSYNC POP. Designed around their 2001-released hit song “Pop”, the fans of R&B and slots alike will be taken on a tour filled with mystery Pop symbols and the main feature with Encore Free Spins that expands the reel beyond the base game’s limits. There also lies the grand prize of a 5,000x bet, which positions this game somewhere in the medium-volatility spectrum of Play’n GO’s ever-expanding portfolio of music/IP slots. NSYNC POP is out from 30 June 2022, so here’s a little something you’d be glad to know before play.

With its unorthodox 2, 3, 4, 3, 2 grid layout, the NSYNC slot gameplay resembles that of KISS Reels of Rock. Unlike the rock band, however, the show is concentrated mainly on a couple of bonus features that are initially played out on 5 reels with 144 ways to win. Spinning in stacked positions, you’ll find four low symbols and five of the band members who, together with a wild symbol, can pay up to 10x for a full line. To introduce more pop into the game, the studio has added a random mystery symbol feature. Every now and then, two or more Pop symbols can appear and burst to reveal matching symbols of any type except Scatters.

Get 3 Scatters in the main game to trigger 8 Free Spins and expand the reel vertically. Any Pop symbol that will appear in the new, extended positions will activate that space to add more ways to win. This time, Pop symbols can also reveal Wilds that will stick till the end of the freebies. Better yet, when all extra positions become activated, the bonus will continue with the maxed-out 2,400 win-ways, and an Encore Spin will be rewarded at the very end. Again, this is something that you’ll also find in the KISS slot. In the Encore Free Spin, only the high-paying band member symbols can appear, and any locked wild symbols will be kept. Sadly, you’ll get only one chance to lock up some nice wins, and the bonus cannot be re-triggered otherwise. Fortunately, the bonus gets triggered every couple of hundred spins on average, and the Pop symbols land on the screen practically every spin. There is no bonus buy in this game.

That said, NSYNC POP is an entertaining addition to the Play’n GO music slots like Lordi Reel Monsters, Def Lapperd Hysteria, KISS, Alice Cooper, and Twisted Sister, that you may want to try for free or bonus money at a Play'n GO casino. As an FYI to all Play’n GO fans, their Nyjah Huston slot that was launched last July will be discontinued on 15 July, so if you happen to like it, then you have just over one week to play it before it’s gone forever!