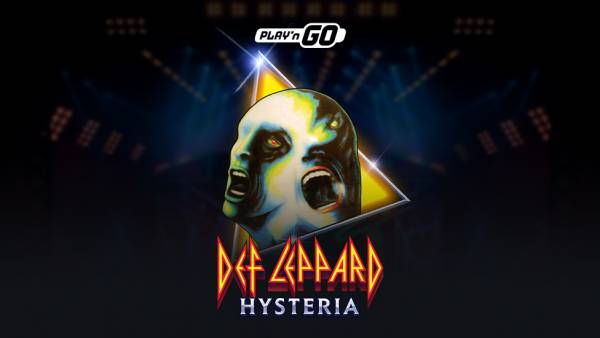 One of the best producers of rock slots, Play’n GO, is getting the crowd ready for the next banger, Def Leppard: Hysteria. Coincidentally, 2022 also marks 45 years since the English hard rock band’s formation in 1977 and 35 years since the launch of their multi-Platinum album, Hysteria. Songs from the album, including Women, Rocket and Hysteria, will accompany players of this slot that has a top prize of 10,000x! The Def Leppard slot will be released across Play’n GO casinos on the 31st of March 2022 at the latest.

Following the release of KISS: Reels of Rock, Alice Cooper and the Tome of Madness and ZZ Top: Roadside Riches, the new iconic music slot rocks a cluster-pays slot format with 35 symbols. There will be 5 low symbols and 4 symbols worth up to 80x—1,000x each. Every winning combo is removed from the view and replaced with new gravity-forced symbols, making it possible to get back-to-back wins in a single spin. Everything is set up for medium volatility and is available with a variety of RTP configurations.

In the base game, all eyes are on the special “power meter”, which can be filled up, similarly to Reactoonz 2, by landing combos of a randomly selected symbol. Once that happens, you’ll get a boost in the form of a Fire Me Up feature that will add 3-6 Wild symbols​ in random positions. It does not guarantee a win.

The other way of getting some extra wilds in the base game is by randomly triggering a feature called Break It Up. It will not only add 3-6 Wilds but also shuffle all symbol positions, creating a guaranteed win. It appears, however, less likely to trigger than Fire Me Up.

Def Leppard slot’s Pour Some Sugar on Me is the main free spins bonus. Albeit a relatively rare sight, it can be triggered with winning symbols that must overlay special spotlight letters that read SUGAR across the 5 reels. Winning symbols will rarely land there all at once, so there will be special markers indicating which letters have been triggered in between re-spins. Once all the letters are activated in between full spins, Def Leppard Hysteria will award 1 Pour Some Sugar on Me Free Spin with 4-7 dropping Multiplier Wilds. The multiplier values will increase with each drop and can reach a maximum of x7. Fire Me Up feature will still be active during the free round bonus, which is also likely to get activated at least once.

We played the pre-released version of the rock game and think that fans are going to love the experience that much more with their headphones on. Heads up, it’s coming on the last day of the month!