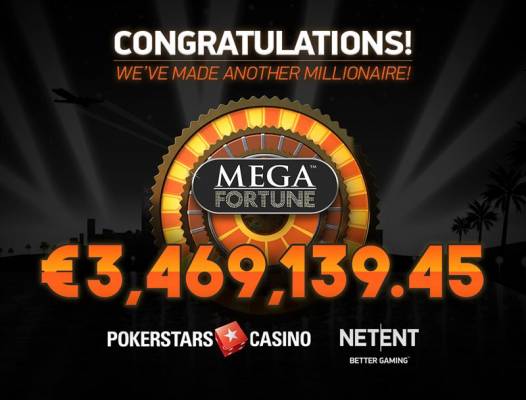 It’s been raining progressive jackpots recently and the latest mega win on NetEnt’s flagship Mega Fortune slot is here to prove that once again. A PokerStars Casino player from Germany converted his €2-deposit into €3,469,139.45 ($4,078,112.92), setting a new record for the casino and leaving everyone else green with envy.

To give you some perspective, this low-volatility NetEnt video slot has struck eight jackpots of more than 1 million euros in 2018 alone! In fact, the most recent one worth €5,984,456 (SEK 61,415,649) was won earlier in July on LetsBet Casino. That’s just over two months and a shy of one jackpot per month over the year!

Now, the player who got lucky on this 25-liner this time is from Lower Saxony, Germany, who had arrived home from work late and decided to unwind with a Mega Fortune slots session. Little did he know that when he was waiting for his pizza to cook in the oven it would change his life forever.

“I was numb and disbelieved for a few minutes,” said the man, who had the same shocked reaction from his wife when he shared the news, the report says. We really enjoy seeing things as they happen so NetEnt was quick enough to upload a recording of that Mega Jackpot trigger to YouTube which you can watch here.

Henrik Fagerlund, NetEnt Chief Product Officer commented: “After breaking yet another record, NetEnt’s Mega Fortune has once again underlined its legendary status among slots players. This time it has paid out the biggest cash prize in Stars’ history, with the jackpot swelling the number of Mega Fortune millionaires to eight in 2018.”

Coincidentally, NetEnt’s rival Microgaming are just recovering from a bigger party when their iconic jackpot slot, Mega Moolah, set a new world record at the end of last month. It happened when an anonymous Grand Mondial Casino player triggered a massive €18,915,872.81 jackpot from a 75-cent bet on an Android mobile device.

It may seem like all the opportunities are gone for now, but the prize pools are rising quicker than before, so chances are there could easily be another winner by Halloween. Keep an eye on Yggdrasil slots like Empire Fortune and Joker Millions, which are also about to make history with jackpots beyond €6 million each!

Any luck with any of these games lately? Feel free to share your story in the comments below.