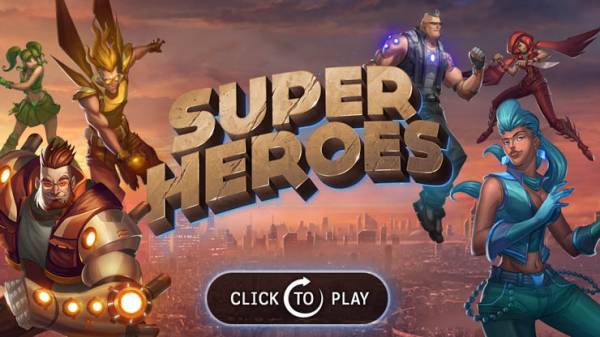 Last time we heard from Yggdrasil Gaming was three weeks ago. Then the award-winning European iGaming company introduced the new Missions feature, which is part of their in-game promotional tool called BOOST™. Now it’s time to introduce you the new blockbuster video slot Super Heroes in more detail, based on the official report and first impression.

Super Heroes is a 20-line slot with 5 reels. It features Wilds, 8 regular symbols and a jackpot of 60,000 coins. However, the movie-like experience is brought to life with the one and only Super Hero Feature that’s triggered at random. Each one of the superheroes – Mirage, Raven, Hopper, Tesla, Trance and Knox – have a unique feature and a level that goes from 1 to 4 which marks the power. In short, you can look forward to extra coins, lots of Wilds and multipliers.

The moment you trigger 3 or more Free Spin symbols on the screen, you’ll win from 4 to 7 freebies. During the bonus, the Superhero Feature is active on each spin. What’s more, each hero levels up each time they are summoned, for better chances to strike big wins at the end of the spins.

With the key facts covered, the game is available for play from today at your favourite Yggdrasil casino, for free or real money. Play on desktop or go mobile, because Super Heroes has an HTML5 version as well. But you may want to hold off the play just a bit because of the following.

To celebrate the launch, Yggdrasil’s operators will host a €25,000 network tournament that will go live this Friday, 28th October. The fun with leaderboards and in-game raffles will continue for over a week, till 6th November.

That in mind, feel free to mix it up with two other slots that they launched within the month’s time: Double Dragons and Empire Fortune. The former has up to 100,000 coins up for grabs with Dropdown Wins and the Double Dragons Feature, which creates two Stacked Wilds in both the base game and Free Spins mode.

Empire Fortune, on the other hand, is their second progressive video slot, where the grand prize is currently over 1 million EUR. Not only that but there are 3 progressive prizes, plus Free Spins with a win multiplier that goes up to x10! From what it looks like, it’s the best progressive slot Yggdrasil has ever made, and it’s been available for play since October 5.

To round up the news report, leave a comment with a thumbs up or down to mark your opinion about the heroes slot.