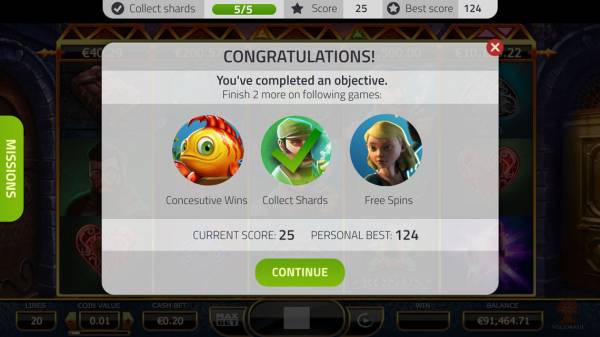 In recent months, Yggdrasil Gaming has shown itself to be one of the top innovators in the iGaming industry. After the introduction of new value-added tools like BOOST and BRAG, the company has just launched its new Missions feature within its BOOST marketing platform.

Missions is the first tool of its kind. Across three designated slots, players are given the opportunity to compete for extra prizes by being the first players to complete a specified mission. For the month of October, the three missions being assigned for a chance to win $25K in cash prizes are connected to three of Yggdrasil's most recent slot offerings: Golden Fish Tank, Vikings Go Wild and Holmes and the Stolen Stones. In order to win a first prize of $20,000, a player needs to complete all three missions in the least amount of spins. As the BOOST marketing platform promised, casino site operators are going to be able to start offering unique benefits to its players.

The current Missions contest is being sponsored directly by the marketing department at Yggdrasil. The contest is scheduled to run from October 7 to October 14, with prizes scheduled to be paid out on October 16. After the completion of the contest, Yggdrasil operators will have immediate access to the Missions tool in the BOOST platform.

This wonderful new tool comes on the heels of the introduction of BRAG. The BRAG function allows slot players to capture their winning spins and record them for prosperity. Once these winning spins have been captured, they can be easily shared with family and friend through social media. The combination of all these value-added features proves that Yggdrasil's brain trust is not going to rest until they exert their great influence on the rest of the iGaming industry.

According to Yggdrasil Gaming's CEO Fredrik Elmqvist, "We are always on a mission to give players a much deeper, more exciting experience, and that is exactly what Missions does. It’s the perfect way to create a more competitive environment within the games and an opportunity for operators to be creative when it comes to gamification."

He later added, “Missions sits perfectly alongside our other in-game promotional tools in BOOST, as well as our BRAG social media tool and is yet another tool which allows operators to better cater for their players’ wishes."