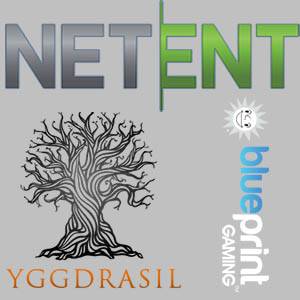 Good news for players as three leading iGaming studios have just announced their new and upcoming slots for this week and the near future. Let’s take a closer look at each one to give you some idea of what to expect.

First of all, a member of the Gauselmann Group, Blueprint Gaming, has once again joined forces with Team 17, the company which is better known for creating the iconic Worms and Alien Breed video games. This is the second game in Blueprint’s Worms series, called Worms Reloaded, which will have 20 paylines and 5 reels, which is 30 lines less than in the pioneer.

Since the first Worms slot has three bonuses, we’d expect the future release to be at least just as fun. Fortunately, players don’t have to be disappointed with the result as the new game brings lots of action in the Battleground bonus with win multipliers, Blitz Blast Free Spins, and introduces the almighty Super Sheep, which can fly across the reels to form random symbols and generate mad wins.

Worms Relaoded will also be the 5th game to join the Jackpot King progressive jackpot family. The game will be available in Flash and HTML5 at an unknown date.

That said, Yggdrasil Gaming has been busy developing new games as well. Hot on the heels of the Big Blox slot comes the Double Dragons creation, with 25 lines and 5 reels. Inspired by orcs, dragons and elves, the video slot features wild reels of up to 28 symbols long, multipliers, free spins and the very promising Double Dragons feature. The last type of feature kicks in after any four consecutive wins by generating 2 stacked wild reels. The Double Dragons slot will be available at Yggdrasil casinos very soon.

Last but not least, it’s a very important week for NetEnt as well, since on Wednesday they finally launched their third NetEnt Rocks creation Motörhead. This 76-line slot is an ideal extension to the band’s image, presenting you two random bonuses in the main game and hard rock style free spins with additional Wilds during the bonus game.

Here’s what Simon Hammon, Chief Product Officer of NetEnt, had to say: “The NetEnt Rocks tour has rewritten the rules for branded games, with Guns N’ Roses and Jimi Hendrix exploding onto centre stage this year. Now, our customers can crank up the volume once more with the launch of our slot based on the iconic gaming song Ace of Spades, which we’re sure will capture player’s imagination yet again.”

That said, tell us how you like the three new games. Has the rock slot and Ian ‘Lemmy’ Kilimister met your expectations? Leave a comment below.