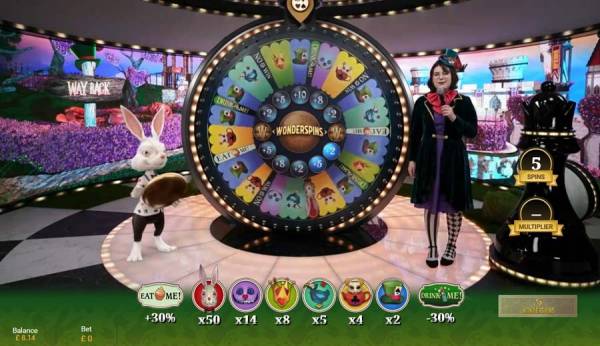 Playtech is ending the year on a high note, introducing yet another exciting live casino game: Adventures Beyond Wonderland Live! The live game show is based on their popular slot and is planned for full release this December. Some lucky players will be able to get their hands on the new shiny wheel of fortune with all its tea party bells and whistles at select sites already this month.

Unlike Pragmatic’s newly announced Mega Wheel, the Playtech powered show is best compared to Evolution’s Crazy Time. It uses a modified version of the studio’s own Spin a Win wheel, which in addition to the numbered sectors that pay x1--x10 bet, includes four bonuses. In addition to the presenter or host(ess), who is dressed as one of the Lewis Carroll characters, the studio also uses the latest technology to bring to life animated characters who seamlessly interact with physical objects in the room and add an experience alike Monopoly Live.

The bonus segments include two Mystery bonus sectors, which is not included in the side bets but will pay a random multiplier on the player’s bet, depending which of the four cards they pick (up to 10x). The other, more exciting bonus rounds include the following:

Magic Dice – It’s a multi-level dice game with increasing win multipliers of up to 100x stake. Depending on which dice the player selects, red or white, they will either progress on the board or be awarded a multiplier prize every time the dice are rolled.

2 Wonderspins – Once triggered, the whole wheel of fortune will rotate 180 degrees to reveal new sectors and an inner wheel that contains additional bonus multipliers (up to 50x by default) and extra spins, all of which help to maximise the rewards found on the main bonus wheel, coupled with two specials that can either increase or decrease your overall multiplier for the feature.

5 Wonderspins – Same as the above but with five spins.

So, if you want to go at something different than roulette and blackjack, or have enjoyed Playtech’s new Live Deal or No Deal game that they launched earlier this year, then the new Adventures Beyond Wonderland Live offers a whole lot of entertainment for as little as 10 cents. Keep an eye on Playtech casino sites to be among the first who get to play it, and win up to 1,000x your stake.