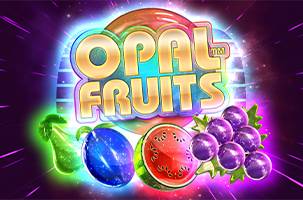 Big Time Gaming is ready to rock the world of online slots with their own new game called Opal Fruits. Featuring 5,625x ways to win and an exciting new feature called Triple Reaction, it can produce wins of up to 36,000x the bet per spin. You can already find it in early access at LeoVegas and Royal Panda casinos from 29 May - 12 June, coupled with special promotions.

The two casinos will be giving out bonuses to new customers. In fact, you can get your hands on 30 free spins on Opal Fruits when making a deposit at Royal Panda on 2 June. Customers from the UK and Ireland should keep an eye on LeoVegas promotions for further info on special offers that are due soon as well.

Speaking of the new game, did you know that Opal Fruits actually got its name from Starburst, before they changed the name of the candy back in 1998! Hence the space theme and shiny fruits which can produce wins of up to 50x the total bet for a full line across the 6 reels.

This time there are two Extra Reels boosting the MegaWays reactions, one at the top and one at the bottom of reels 2-4, which move in a different direction. Opal Fruits also features x3 Wilds which not only triple wins but also multiply each other on different columns and add together on the same column! Note that these special symbols only appear in the base game.

In the end, it all comes down to the Free Spins, because this is where the magic happens. You need x4 Scatters to win 10 free spins with an unlimited Win Multiplier. This multiplier increases by one after every reaction, so the initial number of spins is bound to last longer thanks to the re-spins/reactions, while also pumping more life into the game as the chances of winning get bigger and bigger.

What can be better than to start the Free Spins bonus with the Win Multiplier at x5 or x10?! This is now possible when in addition to Scatters F, R, E and E, you also manage to get the fifth or sixth bonus symbol on reels 5 and 6 with an x5 and x10 on it, respectively. Finally, BTG has also accounted for a bonus re-trigger, which is now possible only when the win multiplier reaches a multiple of 10. In other words, you get 5 Free Spins are every time the multiplier reaches x10, x20, x30, etc!

If this sounds like fun then you can play Opal Fruits in early access at LeoVegas or Royal Panda, until the wide release on 12 June.