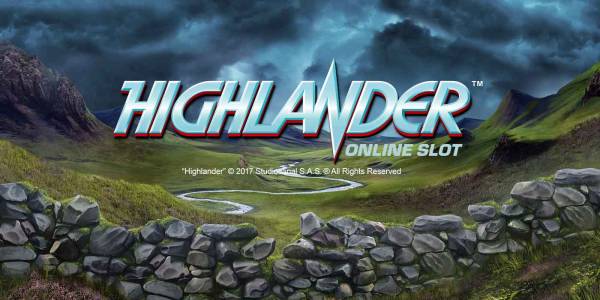 Although Microgaming and its Quickfire platform are known to release several slots each month, there’s one video slot that has created a lot of buzz recently – the Highlander Online Slot. The game went live across the Microgaming casinos on Wednesday 6 December 2017. So, let’s take a look what their last branded game of the year has in store for you.

Based on the original 1986 movie, which is now a cult classic, it features the film’s original cast members, including Christopher Lambert as Connor MacLeod, and “atmospheric artwork” that makes the reel and symbol animations pop-out even more. Add a blistering 80s rock soundtrack and 243 ways to win, and you’ll get wins of up to 102,500 credits.

The Highlander slot is played at 40 coins per spin (for 0.40 credits at least), and commonly to branded video slots, plays at a higher variance. You can win up to 25x your total stake per line for a Wild combo, and up to 100x for five of the Scatters. And Scatters is what you need to trigger any type of a bonus.

Get 2 Scatters/Bonus symbols to activate Highlander’s first feature, which will turn these special symbols into additional Wilds. Better yet, get 3 of them to win 10 Free Spins with Quickening Wilds. Surely, this is another fancy name for random Wilds, which can appear on each spin as the lightning strikes. The best part about it is that the number of possible substitutes increases with each strike, which makes for a thrilling bonus ending. Sadly, you won’t be able to re-trigger the free games bonus as that would possibly get out of control, at least in their mind.

Now, here’s some behind-the-scenes comments with David Reynolds, Games Publisher at Microgaming: “Highlander™ is an iconic brand, and the game studio have worked tirelessly to create an online slot that pays homage to the 80s movie and its cult classic status. An epic soundtrack composed by our game studio is a great tribute to the brand.”

“The features in the game perfectly represent the movie; the stroke of a sword which turns scatters wild in the base game is characterised by the legendary sword of the clan MacLeod, while Quickening Wilds™ in free spins is an escalating feature that builds the opportunity for players to win big!”

If this has spiked your interest, then you’ll find the new Highlander slot at one of the many Microgaming casinos featured here. Is this another failure or success from the developer? Leave your comments below.