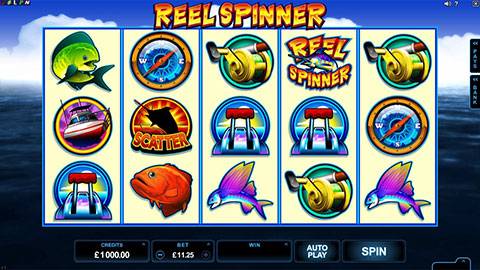 Powerful iGaming software developer Microgaming has exposed its plans to get July off to a fishing good start with the announcement they will be releasing a new video slot titled Reel Spinner. The game will be carried on the Quickfire gaming platform, along with many of Microgaming's top video slot games.

Reel Spinner is expected to be released to operator sites on July 6, 2016. What the operators are going to find is a wonderful video slot based on the leisure activity of fishing. The game comes with a 5-reel, 15 pay-line game format. From all appearances, the graphics look colourful and fun against an ocean view background.

The game's low paying symbols are all represented by an assortment of ocean fish, parts found on a fishing boat and fishing gear. Each of the fish is designed as really cool looking caricatures. The scatter symbol is represented by a sailfish with a sunset background and "scatter" embedded in the middle. If the player lands three or more of these scatters on the same spin, they win the opportunity to play a two-tiered bonus round.

If the player wants a more conventional way to determine free spins, there is a "free spins" bonus symbol that gives the player a predetermined number of free spins if they land three or more on the same spin. Free spins can be re-triggered.

Based on the game's proposed betting range, Microgaming is surely hoping that this new video slot will quickly become a favourite among slot players. While the video sequences and soundtrack are reportedly decent, players will have to wait until the release date to see if this game is a keeper or needs to be tossed back.

In the company's press release, Neill Whyte, Head of Product Channels, stated: “This game combines a great theme with a solid maths engine, containing a fun and new-fangled feature. We know players like fresh content with unique features, so we expect Reel Spinner to be a popular addition to our ever-growing games portfolio.”