GameArt Slots Now Available in Italy and Romania Thanks to iSoftBet 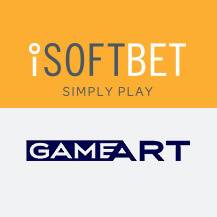 Players from regulated markets like Italy and Romania who have been craving for new games can finally relax for a moment as GameArt is now available at local online casinos as well. The move was possible thanks to iSoftBet and its Game Aggregation Platform (GAP), where GameArt slots are featured among 35+ other suppliers.

Being regulated in more than 12 markets, including the UK, Denmark, Belgium, Latvia, Estonia and Alderney, iSoftbet has the licensing power to help smaller and fast-growing game developers like GameArt expand to new markets. In fact, GameArt is already featured on two Italian online casinos: Betaland and Netbet.

Among the first games to be certified by the local Italian authorities include Crystal Mystery, Wild Dolphin, Explosive Reels, Gold of Ra and Money Farm. The studio’s newest release, 4 Symbols, is not on the list for now. The same goes for players in Romania, who can also choose from close to 40 of their popular slots.

Here’s a word from Maja Lozej, CEO of GameArt: “iSoftBet supplies content to some of the world’s largest and most successful gaming operators, and we are excited that GameArt’s portfolio is now available to their network of operators.”

“We are particularly excited to be offering our slots to players in Romania and Italy, and plan to leverage iSoftBet’s licences to enter new jurisdictions in the coming months.”

Some other game developers on the GAP platform which could find their way to new markets with iSoftBet’s help are Playson, Realistic Games, Habanero or the newcomer Wazdan, just to name a few. And speaking of regulated markets, iSoftBet just recently made a move to Africa and Latin America, and the Baltic States.

Michael Probert, Head of Business Development at iSoftBet, commented: “GAP has emerged as a market-leading aggregation platform due to the variety and quality of games offered and the markets we can take Partners into, and this partnership with GameArt strengthens this position.”

He added: “iSoftBet holds licence for a UK, Alderney and Romania and offers certified content to multiple regulated markets which is why we have been able to open the door for GameArt into new markets such as Romania and Italy.”

See our complete list of iSoftBet casinos here or head to the casinos to start playing for free or real money.