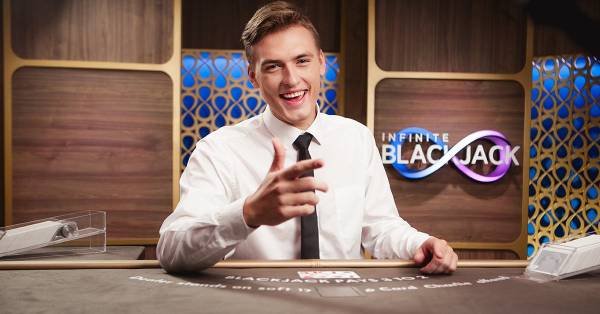 Evolution Gaming, the world’s most recognisable brand in live gaming, has just launched a new type of table game. It’s also the first totally scalable live blackjack with an unlimited number of seats, which they intuitively called Live Infinite Blackjack. It’s online and available for play at one of the featured Evolution casinos right now.

Having just returned from the EGR Operator Awards 2018 Ceremony at Grosvenor House Hotel in London with the Game of the Year title for this year’s hit, Lightning Roulette, the company didn’t want to rest on their laurels but announced a new stream live from Evolution’s primary central studio in Riga.

So, instead of only seven seats, the Infinite Blackjack can take a limitless number of players who are dealt the same initial two-card hand. From then on you make independent decisions and can end with a different hand than other players. All while interacting with the dealer like in a real casino. At the same time, you can watch the dealt cards disappear into the table thanks to a unique system integrated into the table so that any additional cards don’t distract if you decide to stand.

The main bets can range between 1-5,000 credits, and there are four side bets with their own limits: Hot 3, Bust It, 21+3, and Any Pair. This blackjack also plays with a six-card Charlie bonus, which you win if you reach 6 cards without busting. The RTP is also improved compared to a standard blackjack game, and the dealer must stand on soft 17.

Todd Haushalter, Chief Product Officer at Evolution, commented: “With Infinite Blackjack we finally cracked the code on how to make a one-to-many Blackjack game fun and without having to make any rule changes. We did this using advanced game software, that combines the live dealing of physical cards and virtual cards directly to each individual player. This enables the dealing of individual hands for each player at the table, irrespective of how many players there are at any given time.”

That being said, players in New Jersey can also rejoice as Evolution just extended their partnership with The Stars Group for their PokerStarsCasinoNJ.com online casino in New Jersey, USA. Sooner or later, UK PokerStars players are likely to see Live Infinity Blackjack among the live games and croupiers who will be live streamed from Evolution’s recently opened studio in Atlantic City.

Let us know in the comments what you think of Evolution’s new blackjack table, and if you prefer this one over the standard version.