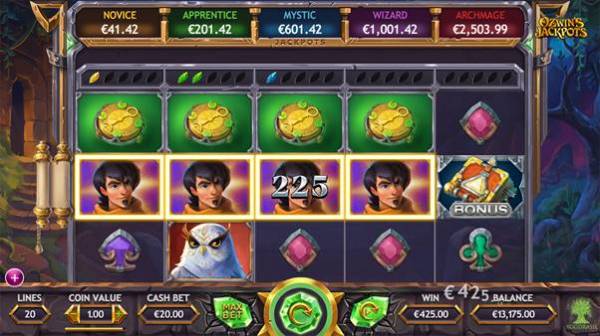 Having announced its entrance into the table and bingo games vertical, and signed a galore of partnerships all over Europe in a short period, Yggdrasil continues its march as an industry leader by releasing a new progressive jackpot slot: Ozwin’s Jackpots. The new game is available for play at select Yggdrasil casinos since the official release on January 24, 2018. Here’s why they believe it’s going to stick with you for years to come.

The new Ozwin’s Jackpots slot has 5 reels and 20 pay-lines. Finally, it’s also a game which has five local progressive jackpots (see image above), just like Holmes and the Stolen Stones, which they announced more than two years ago. Better yet, they claim that “the jackpots will fall regularly and more often than other multi-jackpot games”!

Other than the jackpots, the game also excels both visually and with its theatrical SFX, transcending the mysterious theme beyond just the symbols and out of the mobile or desktop screen (iSENSE 2.0+ technology).

Technically, the newly-announced 20-liner is a joy to play as well, featuring a free spins bonus with win multipliers, and a bonus game with special rewards. To win one of the jackpots, you need to collect crystals to restore the orbs of power, or 3 or more of the Free Spin symbols. As soon as you trigger any of the two, you win 10 re-triggerable free spins. The mission is to get orbs of the same colour which match one of the jackpots, while also enjoying tripled returns.

The Spellbook bonus, on the other hand, can be yours for 3 Bonus symbols. There you can win additional crystals or coins until you reveal a hidden evil spell which ends the feature. Note that the collected crystals are saved for the base game, which is independent of the free spins.

That said, you can try the Ozwin’s Jackpots game at one of these Yggdrasil casinos for free or real money. Just mind the high variance, but also the generous theoretical average return to player (RTP) which is 96.7%.

That said, here’s a word from Head of Slots at Yggdrasil Gaming, Jonas Strandma: “Ozwin’s Jackpots is all about jackpots. Yes, the game has an engaging concept, fun gameplay and sound mechanics, but its real attraction lies in the fact that it’s designed to pay out jackpots more often than other multi-jackpot games, with the smaller ones dropping many times a day.”

So, there’s only one way to see if it’s any good for you: play Ozwin’s Jackpots demo or for real money at Yggdrasil casinos. Then share your honest opinions about it in the comments below.