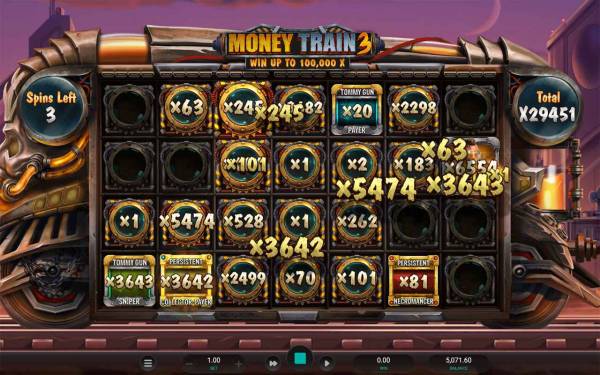 If you have followed the slots industry, then you may know the reputation that follows the Money Train slot by Relax Gaming. Lo and behold, one of the greatest slots of the century is ripe for another sequel, the Money Train 3. It’s meaner and has some cool new bonus features that include the Persistent Shapeshifter, which transforms into any feature on each spin, the Absorber, which soaks up all multipliers, and the Tommy Gun, held by the Payer or Sniper and targets 1 symbol type before adding to its value. The party starts on the 22nd of September, so let’s prepare by sharing some of the highlights.

For the most part, Money Train 3 is very similar to the first two games, featuring a 5x4 format with 40 fixed lines. The theme has been updated slightly by adding a touch of sci-fi elements and making it appear more cyberpunk than Western. Because of that and other SFX, the new visuals are more eye-popping. Other than that, the maximum payout per line and per symbol is still 20x.

The other significant change comes with the refreshed Respin Feature. It’s now triggered at the end of any spin without a win instead of with double Scatters. One of the symbols already present on the reels will be selected randomly to be sticky, and a respin is awarded. During the respins, additional symbols of the same type can land. Every time a new symbol lands, a new re-spin will be awarded. During the respins, there’s also a chance of getting random multipliers of 1x, 2x or 3x that don’t stick but increase the final multiplier and award an extra spin.

As always, the biggest rewards are reserved for the bonus, the Money Cart Bonus Round. There, the potential has been lifted to a whopping 100,000x, which is well above all the developer’s previous slots. The natural way of winning this feature is by landing 3 or more Bonus symbols. It’s played just like the other Money Train slots by catching multipliers or special symbols and resetting the free spins meter as many times as possible to get the highest payout. In addition to the “old” symbols, there are a few new ones mentioned above:

There are also five Persistent symbols that have an unlimited lifespan, including a new Persistent Shapeshifter that turns into a different special on every spin (Collector, Collector-Payer, Sniper, Tommy Gun Sniper or Tommy Gun Payer).

The other way of getting into the bonus is with one of four types of Bonus Buy options, which is 3x more than before:

That wraps up our quick intro. If this high variance slot is to your liking, then go to our list of Relax Gaming casinos to pick your favourite for September’s launch.