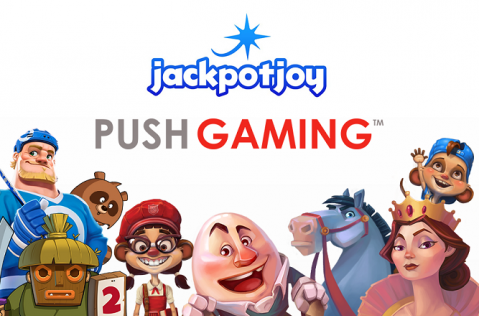 Having announced its expansion plans in Malta earlier this month, Push Gaming is excited to introduce another major casino group to its growing base of clients, Jackpotjoy Group. This means their many custom-made and HTML5-based games will soon hit some of the most prominent online casinos, including Vera&John and InterCasino.

Formed in 2010, Push Gaming is a relatively small and independent games development studio based in the UK and Malta. Their collection of 14 video slots is already featured across a wide range of casino network, including the Betsson Group, LeoVegas, Rank Group, William Hill, Casumo, Kindred, and Ladbrokes, among others. This includes operators powered by Playtech, Microgaming, Relax Gaming and OpenBet.

The company has built exclusive games, such as the progressive Powerforce Heroes and Powerforce Villains, which went live only with Betsson Group in 2016, as well as the portrait-mode-only mobile games like Gems of the Gods, which they launched the same year.

Unsurprisingly, all Push Gaming’s video slots are made with a mobile-first approach, including the very latest epic Dragon Sisters slot, which is anticipated to launch on Jackpotjoy Group sites – Jackpotjoy, Starspins, Botemania, Vera & John, Costa Bingo and Inter Casino – with the rest in the near future as well. Other prominent titles include Humpty Dumpty, Gems of the Gods, and Peter and the Lost Boys.

Having hinted at the release of a new range of games coming towards the end of the year means Push Gaming fans don’t have to wait long to get their hands on the next top-of-the-range game. Note that as of now, the studio holds licenses with the UK Gambling Commission and Alderney Gambling Control Commission only.

That said, here’s what James Marshall, Managing Director, Push Gaming added to the report: “We’re very pleased to be working with another market leader in the Jackpotjoy Group. We’re seeing great results from our product strategy, with innovative gameplay and user experience on mobile devices. We’re confident our games will excite and entertain players across the Jackpotjoy brands.”

“Push Gaming are producing some fantastic games, and we’re particularly impressed with their approach to mobile. We look forward to working with Push Gaming and offering their range of games and features to our players”, replied Victor Olinger, Head of Gaming, Jackpotjoy Group.

With that in mind, let us know which Push Gaming slot you think is a must-play in the comments below.