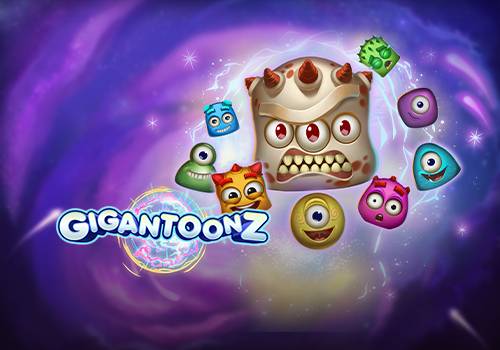 "Dr Toonz and his creations are out-of-this-world. But there is something bigger, much bigger, on the horizon – even bigger than the Reactoonz leader, Gargantoonz!" -- Play'n GO is talking about the new cluster slot that is scheduled to be released in a week, on the 27th of January. If you’re a big fan of the series or just happy to try out some highly anticipated new slots, then let’s take a closer look at what this game is all about as we have already taken it for a spin.

For the most part, the game looks and feels just like before. Slightly more than before, 10 symbols make the base of the game, and they have a capacity to pay out wins of up to 1,250x bet for a cluster of 30 or more symbols. Note that the minimum you must get to achieve a win is 6 or more symbols. They must be touching horizontally and/or vertically.

Also, this time around the bigger symbols step up and are in charge of the game for most of the part. We’re talking of the 2x2, 3x3, 4x4, 5x5, 6x6 and 7x7 symbols. But there’s a catch: these large symbols count as a single symbol: getting one oversized reaction will not get you anything. Indeed, you will have to get at least 5 of the same symbol around it. The good news is that each mega symbol will also have a cluster value or a multiplier in other words, of up to 13x. Plus, each winning mega symbol will leave a Wild on the grid, which helps to form new win combinations. There is also one exception to the rule: If a mega symbol cannot drop down, it will fill up the space with its own 1x1 versions, without cluster values. And that’s a good deal too.

The maximum payout in the third release is slightly lower than in the previous two games at 4,000x bet. To help get even close to that number there are also Quantum Wild symbols, which can drop in quantities 5-10 per a non-winning round, and Gargantoon Wilds, which appear through the Quantumeter only. That’s a special recurring feature in the series, which fills up with wins and activates features when enough charges are generated. The Quantumeter has 4 charge levels (Disintegration, Metamorphosis, Radiation and Gargantoonz), that when activated, will be played out one by one when there are no more cascades.

Overall, the fun factor of the new Gigantoonz slot is high and it’s generally a user-friendly game to play. Despite the below-average maximum win potential, we saw plenty of opportunities for 100x sized wins. If you want to give it a shot for yourself then keep an eye open for it at Play’n GO casinos from exactly a week’s time.