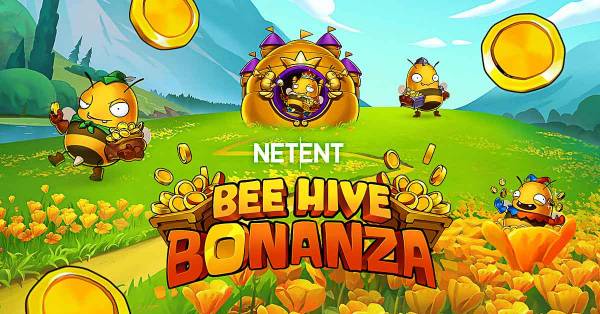 NetEnt has a new game to show off, and it’s called Bee Hive Bonanza. It’s a fun, medieval bee-themed slot with reactions and the signature Avalanches that keeps the game going. Despite their jolly appearance, these buzzing bees can honey-up the pot of gold to royal-sized wins of up to 5000x bet. Before you go on this Middle Age adventure on the launch that is scheduled for 28 September, let’s set you all up by going over the main features, gameplay and stats.

While it may hint at the famous MegaWays slot, Bee Hive Bonanza is actually a slot with no pay-lines. Instead, you’ll need 6 or more of the same symbol anywhere on the reels to win. Already, that is different to the majority of other cluster-pay slots, where symbols must be adjacent. All scattered symbols that make up a win will then explode and create an avalanche, allowing new symbols to form new wins potentially.

There are 4 low and 3 high symbols, which will pay between 0.20x for a cluster of 6-7 symbols, and 8x for the maximum, which is 22-24 symbols. Additionally, there are four types of bee symbols, which are valued at 1x, 2x, 5x and 10x. Together with Beehive symbols, they make up the Money Bee Feature. There are three types of beehives:

Because Bees and Beehives can accumulate over multiple avalanches, it can create fun and unexpected win scenarios. Moreover, there can be more than one Beehive on the reels at once, creating even bigger wins. Better yet, get 3 or more Scatter symbols to win 10, 15 or 20 Free Spins. During the bonus game, Scatters are collected into a special meter because for every 3 you’ll earn 2 additional spins and a better multiplier. The Scatter meter rewards are as follows:

In Bee Hive Bonanza, the bonus is also available for purchase at the cost of a 100x bet, for which you’ll randomly get 10-20 Free Spins. This option is handy sometimes because Free Spins are not that frequent and will drop only once every couple of hundred spins. Speaking of statistics, the game has two RTP setups, with the highest being 96.09% and the lowest at 92.08%.

NetEnt’s Bee Hive Bonanza joins other new games that were released by the studio this year, including Knight Rider, Funk Master and Space Wars PowerPoints. Following this launch, there are at least two very promising new slots to look forward to: Cornelius and the most anticipated NetEnt slot of the year, Super Stars. As always, see our NetEnt casinos list on where to play them.