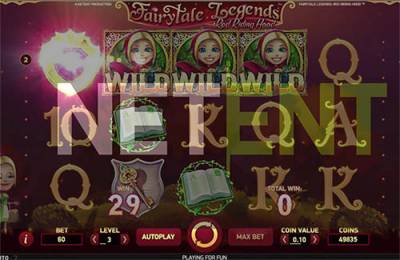 Having just released a new live casino solution called NetEnt Live Mobile, the Scandinavian iGaming company is back in action with the announcement of a new game. It’s called Fairytale Legends: Red Riding Hood and it’s, what seems to be, a 20-line video slot.

As the game is not yet released and scheduled for launch in October, we can only judge it by the official video teaser that came out this Monday. Here are some of the main game highlights that it reveals, which we can all look forward to.

First, as you can tell by its name, it’s inspired by the good old fairy tale. And since there’s nothing magical about the little girl herself, the developers have added a touch of magic with a fairy and her magic wand, which in turn can activate one of the three base game features completely at random.

As you keep spinning the reels, the mysterious fairy can show up and wave her wand to trigger a Fairy Magic Spin bonus. This will highlight random symbol positions and fill them up with the same type of symbols to help you form a winning combo right away.

The Fairy Wild Spin and Fairy Surprise bonuses are the two other random features that the fairy can trigger out of a sudden. They work the same way as the above-mentioned one, awarding you either more Wilds or even bigger clusters of symbols for generous returns.

As if that wasn’t enough, the team at NetEnt has included several more features, one of which is the Sticky Wild Re-spins. Thanks to it, each Wild symbol that lands anywhere on the game’s 5 reels will stick and award you with a free re-spin. Any additional Wilds will do the same, helping you squeeze every last bit from the feature for big prizes.

Scatters are part of the Red Riding Hood game too. You need 3 of such on the screen to trigger a chest feature. Pick one to reveal your prize, which can either be a monetary one or one of the two second-screen bonuses.

One of the special features is the Free Spins one. During the 10 freebies that you’re guaranteed to get, you can win 2 more spins for each Scatter that lands during the bonus, for even more chances at the jackpot. Speaking of jackpot, there’s 200x the total stake up for grabs in the table-game like Beware the Wolf bonus, featuring many multipliers along Red Riding Hood’s path.

That said, Fairytale Legends: Red Riding Hood is yet to have an official release date, although it should be somewhere in the end of October. So what do you think of it? Leave a comment to let us know.