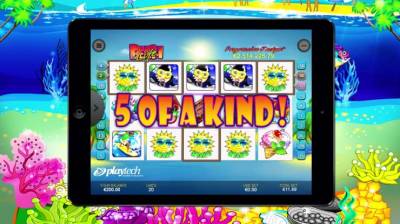 Summertime is as good as any other time to hit a major progressive jackpot. It would seem to be both ironic and yet very appropriate that someone would actually hit one on a slot game titled Beach Life.

Well recently, that's exactly what happened when one lucky unnamed female player nailed five wild symbols and won an amazing return of €2,514,226.79 from Playtech's Beach Life progressive jackpot. The win was accomplished on a mobile device, proving once again that it's possible to win bundles of money while gaming on the go.

Beach Life was developed and released by Playtech almost a decade ago. The game is played with 5 reels and 20 different pay lines against the backdrop of sun, sand and water. The game's low-paying symbols are represented by delicious looking ice cream, a surfer, a diver and a sunbathing lady in red. The smiling sun is used as the game's wild symbol. It is available to substitute for any of the other symbols with the exception of the bonus symbol (treasure chest) and the scatter symbol (sand castles).

During the base game, two or more scatter symbols landed will reward the player with multipliers ranging from 2X for two scatters all the way up to 500X for five scatters. If the player lands three or more bonus symbols, they earn the opportunity to select 3 treasure chests from a population of 14 treasure chests for cash prizes.

While the graphics and video features are decent enough, the real reason why slot players might want to play this game is for the chance to hit the game's progressive jackpot. Exactly what did that lucky lady do to earn her summertime windfall? She succeeded in landing the smiling sun wild symbol on row 1 on reel 1, row 3 on reels 2-4 and row 1 on reel 5. It's not exactly what would be considered a standard jackpot reel configuration, but that's what it took and that's exactly what she did.

It's worth noting Beach Life has one of the most difficult jackpots to hit. Research shows very little news over the years related to other jackpot sightings on this particular game.