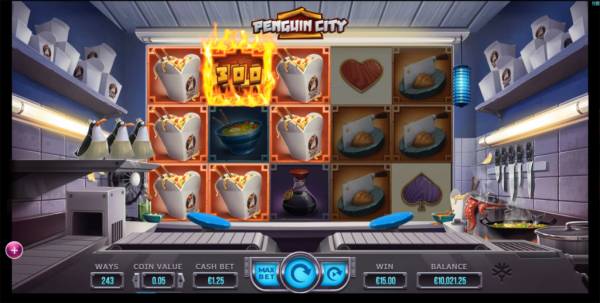 Following Yggdrasil’s two hair-raising slots, Vikings Go To Hell and Tut’s Twister, comes the new amusing Penguin City slot. It’s also one that’s made with casual players and low rollers in mind, thanks to the game’s low volatility which doesn’t come at an expense of a big win potential. The slot’s been available from July 24, 2018, and here’s why you may want to give this one a shot.

First of all, it’s one of the most humorous Yggdrasil powered video slots to date, which revolves around friendly and innocent penguins who are kept as slaves in the hands of the evil chef Emperor Penguin. Your mission is to help free the little fellows while enjoying frequent wins and bonuses.

Penguin City is a 243 Ways slot that’s played with 25 coins per bet and with coin values starting from as low as 0.004 credits. That makes for a minimum bet of just 0.10 credits which casual players should find fairly attractive, especially that the max payout is 164,700 coins or over 1,500x your bet. That’s nearly 4x as much compared to other low-volatility slots of theirs, like Sunny Shores and Easter Island. For reference, the game is played with an RTP of 96.2%.

Aside from 243 ways to win, Penguin City has a lot to do with wild symbols, which only appear on reels 2 and 4. But when they do, and you hit a win, you’ll also trigger the main feature which is the Penguin Escape Mode. In this one, any Wilds will remain where they are for the entirety of the second-screen bonus, triggering re-spins on every win.

Moreover, during the Escape mode, your chances of hitting a win are better thanks to the Penguins, who can reward with more Wilds or swap symbols for wins. Perhaps the best option is when the Emperor Stacked Wild appears on reel 3, which guarantees a win and more re-spins as he moves off the screen with every free re-spin.

Now, here’s what Yggdrasil Head of Slots, Jonas Strandman, has to say: “Penguin City has been a great opportunity for our development team to produce a really fun, light-hearted game packed full of features and a rich user experience. We had great fun creating it, and we are sure the players will have fun playing it, as in addition to the quirky characters and relaxed atmosphere we’ve also created a game mechanic perfect for more casual players – a low variance game that that can also pay out big wins, if the sticky wilds land right and take you on a long winning streak!”

The game is out and available across devices in real money and for free in practice mode. See all our featured Yggdrasil casinos where you may find this game. And since the penguin slot also comes with the developer’s BOOST features, you may also find some slot tourneys, cash races and missions celebrating the game launch.