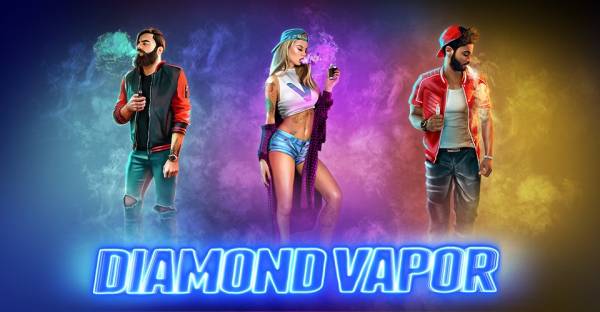 The fast-growing iGaming company Endorphina has just announced the world’s first vaping-themed video slot called Diamond Vapor. Having introduced the Twerk slot at the last year’s ICE conference, they decided to give their players something unique and exclusive again. Here’s what the game’s all about and what you can win.

Diamond Vapor is a 10-line and 5-reel slot that’s just as volatile as any other Endorphina slot. After all, high risk is what their games are known for. That in mind, there’s a total of 10 basic symbols, which pay up to 100x the total stake per line, designed in vivid colours to make the game come alive like their recent slots Maori and Voodoo.

Even though the Vape Bar symbol has no coin value, it’s both a Scatter and Wild. As such, it can replace any of the above and trigger the slot’s one and only Free Games bonus. To win 10 free spins, you need 3 or more Vape Bars, anywhere on the screen. The twist is that unlike the base game, during free games all winning symbols expand to cover the entire reel and award you more coins for additional win-lines.

That said, the game’s available exclusive at www.vapeslot.com, as of now, and has a few surprises in store apart from its sleek design and pleasant sounds too, sponsored by www.diamond-vapor.com.

There are 5 prizes up for grabs, including custom Endorphina flavoured liquids and $20 gift voucher for use on the sponsor’s website. The jackpot is dinner with Keith Fairman, founder of Diamond Vapor. There’s a total of 951 prizes and for a chance to win any of them, you first must register on vapeslot.com and claim your 10,000 credits to start playing.

The competition is free of charge and you can start again every day. The only condition is that the winners can pick up their prizes only at the ICE Totally Gaming exhibition, which takes place 7-9 February. It’s safe to say that after the event it’ll also go live across the many Bitcoin-friendly casinos like Jetwin and BetKing.io, or the ones powered by EveryMatrix.

That in mind, go check it out and let us know what you think of it in the comments below.