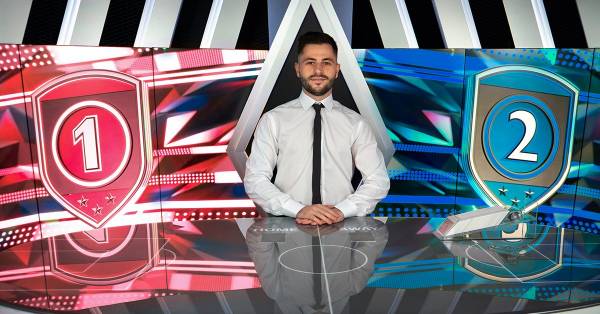 If you’re into football or card games like Dragon Tiger, then you might want to check out Evolution’s updated football-themed live game with a new look and more football leagues to cheer to: Football studio. Here’s what changed.

The award-winning live casino supplier, Evolution Gaming has extended their card game portfolio in their Top Card game category. Also found under the Game Shows tab (depending on the casino), the Football studio is a variation of Dragon Tiger. It’s super-fast (just 25 seconds per round) and simple to play and learn. The signature twist is the live match commentary, coupled with chat and goal celebrations.

Previously designed to look a lot like a football field, Football studio looks a whole lot more engaging now, resembling much of the American commentary studios in between the games. Gone is the football pitch table and the background, which have been replaced with a game scoreboard that’s supposed to add anticipation to the winning streaks. The football-savvy Game Presenter is now also standing and not sitting, and they have a mic which makes it easier to actually hear what they’re commentating as they keep an eye on the games from a studio monitor.

The game itself hasn’t changed. Players can still choose from only 3 bets, Home, Away or Draw, which pay 1:1 (RTP 96.27%) and 11:1 (RTP 89.64%), respectively. Note that there’s no Suited Tie bet as you would find in the Evolution Live Dragon Tiger. All you have to do to play a round is bet from €1-€10,000 as you guess what the two face-up cards are going to be; while also having an option to engage in the chat and follow live football matches’ scores which are displayed by a ticker at the bottom left corner.

Leagues that are now covered in this Evolution studio include English Premier League, La Liga, Serie A, German Bundesliga, French League 1, Swedish Allsvenskan, Champions League, Europa League, American Major League Soccer. Note that you won’t see the actual game played in the game but rather have it somewhere on a second screen. It’s recommended that you join the game during big matches to get the most bang for the buck from this chatty table game.

You’ll find the updated live Football studio at most Evolution casinos right now as the game went live without a major announcement on 21 November 2019. See our full curated list and latest reviews to help you find the best deals on your first bet.