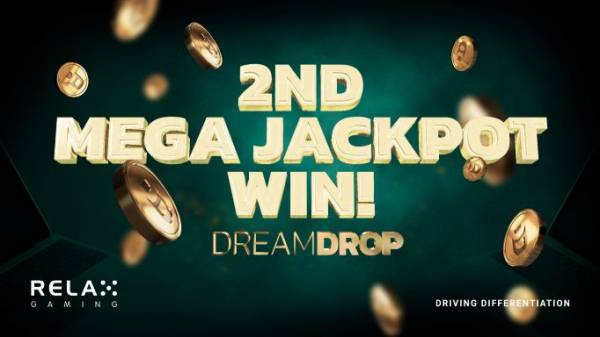 Relax Gaming’s Dream Drop progressive jackpot is on fire! Just a few weeks since its first Mega Jackpot winner, Temple Tumble 2 makes another lucky winner wealthier by as much as €924,386.51! For the largest must-win jackpot network, it means a substantially bigger prize for the next time and an imminent expansion to a few new games. One of them is Volatile Vikings 2 Dream Drop, which you’ll already find at Relax Gaming casinos with the Mega Jackpot at record-breaking levels.

The second Mega Jackpot win is a landmark occasion. Since the launch campaign in late March, there have been hundreds of thousands of individual winners to date, including an impressive 17 Major Jackpots. Simon Hammon, Relax Gaming’s newly-appointed CEO, said: “We have simply taken the feeling of excitement and anticipation that players look for in our products to a new level with the inclusion of Dream Drop. 400,000 jackpot wins so far just show how keen players are for this. We can’t wait to see how this impacts the continued uptake of our games that feature the jackpots.”

Until now, there were only two Dream Drop slots, including Snake Arena, that we wrote about in our previous blog post. Now, the number has increased as three new Dream Drop jackpot slots have been announced. This includes a fun scatter-pays slot, Volatile Vikings 2, which has already been available for a couple of days, followed by the 15-line Wild Chapo that is coming on the 3rd of August, and then another cascade that is the TNT Tumble, which will be launching a week after that. This will most likely make the jackpot network even more crowded, which is usually a good thing. And there’s more good news.

The Dream Drop Mega Jackpot currently sits at around €1.1 million and is the same across all Relax's casinos. Because of how it is set up, the next tipping point for this grand prize is €1.5 million and not €1 million as it was for the first two wins. In other words, the Dream Drop is boosted every 2 wins by a whopping €500,000. It is incremented in this way until it reaches €10 million. And by the way, each time the Mega Jackpot is won, it’s reseeded at a 60% value. That is in contrast to Microgaming’s Mega Moolah or WowPot!, for instance, that go back to a million or two, respectively.

The Major Jackpot is also running hot at €45,000 and must go before it reaches €50,000. It is also the same at all the eligible online casinos, so it moves quickly and gets triggered frequently. Just for the thrill of it, the other three jackpots, Maxi, Midi and Rapid, are won daily, even hourly.