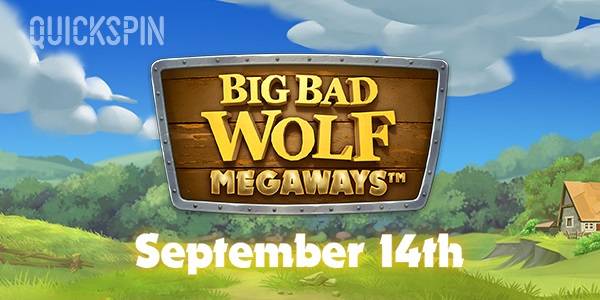 One of Quickspin’s most iconic slots is about to get the Megaways makeover. Marked as one of the studio’s biggest highlights of the year, the tale of the three little pigs is to be continued in a similar but more rewarding fashion, coupled with an incredible soundscape that immediately sets Big Bad Wolf Megaways apart from the crowd. Here is what to expect from the launch on September 14th.

Seen only with 25 pay-lines thus far, the Megaways version of the slot will boast up to 117,649 ways to win, as will be dictated by the signature dynamic symbol sizes and the extra reel at the top with four additional symbols. Just like the original game, Swooping Reels or Tumbling Reels have a major part in the game setup too. This is a feature which Megaways slots have long been popular but which the first Big Bad Wolf slot also excelled at because of the Pigs Turn Wild extra – every second tumble or sweep turns one Piggy symbol Wild. Up to three extra wild symbols can appear on the screen for wins that top 30,000x!

To adjust to the changes, Quickspin has made a paytable revision that includes a new high symbol in the form of the wolf, previously used as the Scatter in the original game. The Wild becomes that much more special in the Free Spins bonus where increasing win multipliers come into effect with every win. Land 3 Moon Bonus Scatters to start with 11 free spins and progress through three stages to earn extra spins and sticky total win multipliers. The feature works in the same way as the original bonus, but with higher rewards that have a significant impact on potential winnings.

Last but not least, the Big Bad Wolf Megaways slot will have a Buy Feature option. For a 90x bet, players can buy themselves through to the free spins and try their luck at any moment. As always, this bonus bet won’t be available in restricted markets. While not a direct incentive, going for the shortcut gives players an edge in the RTP, which increases from 96.05% to 96.44%. The percentage will vary when playing the 94.11% or 90.19% RTP versions that will also be made available on the launch date.