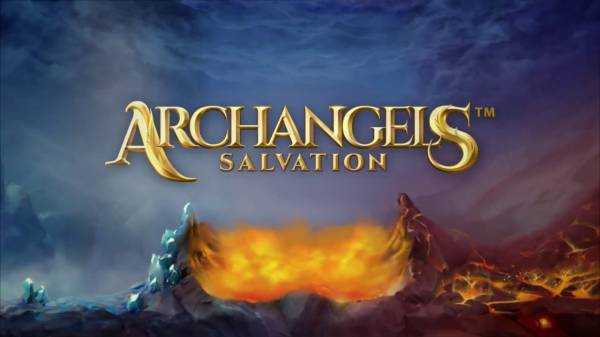 In its mission to release 20 new games in 2018, NetEnt has just released a footage of yet another upcoming slot: Archangels: Salvation. It’s their first game ever to feature 100 pay-lines over 6 reels, which until now has been more in the ballpark of Williams Interactive and Play’n GO. Here’s all we know about the game and its bonus features.

Called Archangels: Salvation, the game is divided into to halves: heaven and hell (think Betsoft’s Good Girl Bar Birl). Epic as it looks, it also seems to be one of their more character-based slots: and why wouldn’t it be after the immense success of Finn and the Swirly Spin game. For some, though, it can look a bit strange, especially that we’re not used to seeing such Betsoft-like 3D animations from the developer.

The game will have 100 pay-lines and a 6-reel, 12-row format with stacked symbols. Note that each bet will still be “just” 40 coins, so the minimum stake would be set to 0.40 credits. Not only is that quite a bit more for a novice but this release would be definitely in the higher risk/volatility region too, so having an extra pair of balls to spin through the dead spins is to be expected here.

Feature-wise, as you can see from the official Archangels: Salvation video teaser on YouTube, there are quite a few bonuses too watch out for, in both the base and bonus mode.

That includes a special expanding symbol, and two Wild features that can kick in during the main game at any spin, spitting random Wild symbols across the reels to boost our wins even further. No doubt the biggest feature of the game is the Free Spins bonus, which can be triggered by Scatters. Unfortunately, from what it looks like, it’s not much of a surprise in terms of additional features apart from the extra percussions and suspension that’s added with increased volume and sound effects.

Note that all that, including the characters, will also work just fine on your phone, both in landscape and portrait mode. Whether or not it’s going to create as much thrill as the newly-released Asgardian Stones -- which you can play at one of the NetEnt casinos here -- or not is yet to be seen, but it’s not a launch to go unnoticed.

For now, check out the video teaser of the game and let us know in the comments below if you see Archangels: Salvation as an equal competitor to slots like Cloud Quest or Spartacus.