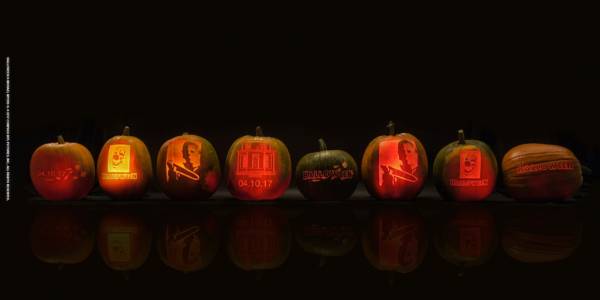 Like any prominent iGaming developer, Microgaming is a firm believer in branded video slots, and we’ve been following their plans to release something special for this Halloween since July. It’s not Highlander, which they announced a week ago, but of course the 1978 American slasher film Halloween, which is now live and available for play at your favourite Microgaming casinos.

As the All Hallows’ Eve is slowly creeping into our lives, the developers are doing their best to keep the eerie vibe in sync across the online casinos as well. And what’s a better way to do it than with the movie-themed releases.

The newly-launched Halloween slot will get you just ready for the over-commercialised day of the dead starting with the creeping sound effects and background track. The film characters Laurie, Loomis, Annie, and Lynda are all featured on the symbols too, though the biggest highlight of the game is the Wandering Reels feature.

Unlike Wandering Wilds, which they’ve just added to slots like Gnome Wood, Wandering Reels is a group of 3 reels that spin together. The point is that they contain blocks of the same symbol, making it possible to fill up all three reels at once, with the same icon.

And like any proper branded video slot, Halloween also has a few bonuses. This includes the Free Spins, Trick or Treat Wheel Bonus, and the pick-and-win type of a feature called Boogeyman Bonus. The game itself is played at a low hit frequency and medium variance, so it’s suitable for a range of different players.

With that in mind, here’s what David Reynolds, Games Publisher at Microgaming has to add: “Our Halloween online slot is a celebration of the classic horror film. The game studio creating this game are big fans of the movie and brand, and I think the passion they have is evident in the game. The design and storytelling is superb and it presents a range of environmental effects that add to the suspense. This is combined with a feature rich game engine that will continually thrill players. As Sheriff Brackett says, ‘It's Halloween, everyone's entitled to one good scare’.”

That said, you can find it for real money and practice play on desktop and mobile casinos powered by Microgaming or Quickfire. Here’s the full list.

On another note, adding more bang to the Halloween slot launch, one lucky Mega Moolah player also managed to hit a whopping €7,742,015.53 progressive jackpot earlier last week, turning him into the second biggest winner of the year and the 5th biggest in Microgaming’s history. The life-changing jackpot was triggered on Unibet. You can read the full article here.

That said, how excited are you with the launch of the horror slot? Leave your comments below to share your thoughts as well.