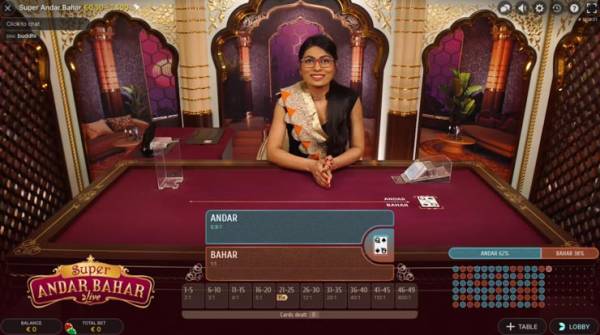 Super Andar Bahar is one of the two new Indian live games by Evolution that is now available for play at select online casinos. This popular Indian card game is easy to understand and with the addition of side bet multipliers, adds an element of surprise. And Evolution didn’t hold back on the quantity nor the maximum possible win amount as Super Andar Bahar offers prizes of up to 4,000x your bet!

Super Andar Bahar is streamed from a beautiful Indian themed studio with traditional music playing in the background to add an extra touch to an authentic gaming experience. In this relatively simple game, there are some handy stats which can be used for guidance. Among the chat and other UX elements, the scorecards include result statistics, bead road and big road, and cards dealt. Bet limits go from 0.50 to 2,500 euros but are subject to change.

The aim is to predict on which side – the Andar (inside) or Bahar (outside) – a card will be dealt that matches the first-dealt card, also known as the Joker or the house card. You can also choose to bet on one of the side bets to predict the number of cards dealt after the Joker until a matching value card.

After the betting time is closed, which takes around 30 seconds between rounds, the dealer will deal cards first to Andar, then to the Bahar, alternating between the two sides. As soon as the matching value card to the Joker comes up, that side wins and the game round ends. The deck of 52 cards is shuffled automatically after each round.

To add more oomph, the Super Andar Bahar will also randomly add 1-5 multipliers. Unlike some other Evolution live games with multipliers, this time around they will be applied only to the side bets. The payouts are distributed as follows:

Todd Haushalter, Chief Product Officer at Evolution, said: “Central to our product strategy is giving players everything they want and even some things they don’t know they want. We are delighted to have done just that by bringing a super-special version of the Indian classic Andar Bahar to Evolution’s live casino. Andar Bahar is well known throughout India and it’s a great game how it is. However, we could not resist the temptation to spice it up a little with a series of side bets that allow players to win astronomically high multipliers, which is something we felt was missing from this superb game.”

Haushalter continued: “I think players are going to appreciate how we kept the base game traditional in every way but added this fun twist as an optional side bet. And there’s more to come! To further support this market, we will be launching another popular Indian card game, Teen Patti, later this year.”

The return to player or RTP of Super Andar Bahar ranges between 96% and 97.85%. The new live casino game has been available at some of the Evolution-enabled online casinos for just over a week alongside other Andar Bahar versions from studios like Pragmatic Play and BetGames.TV.